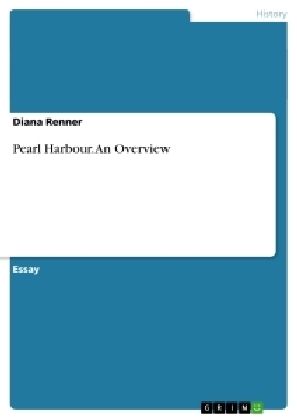 Essay from the year 2007 in the subject History - America, grade: 1,3, University of Education in Schwäbisch Gmünd, language: English, abstract: The state of Hawaii is the 50th of the United States of America and maybe one of the most
popular places in the world. On O'ahu, the third largest of the Hawaiian Islands, many wellknown
tourist attractions like Hanauma Bay or Waikiki Beach, can be found. Furthermore
there is a place on O'ahu which owns a great piece of the American and also the world's
history. Pearl Harbor is a harbor located at the south coast of O'ahu and is generally regarded
as an extraordinary event in American history, remembered as the first time since the War of
1812 America has been attacked on its home soil by another country. The attack on Pearl
Harbor was an unexpected and surprising attack of Japan to the United State naval base at
Pearl Harbor. It took place on the morning of Sunday, December the 7th in 1941. The result of
the war was a decisive victory for Japan and a war declaration of war of the USA on the
Empire of Japan. Thus the USA entered World War II on the side of the Allies. [...]