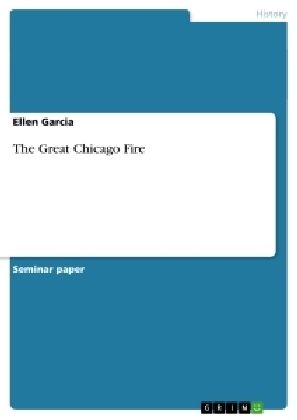 Seminar paper from the year 2013 in the subject History - America, grade: A, The University of Liverpool, language: English, abstract: One of the deadliest fire disasters in American history is the Great Chicago Fire. The fire started on Sunday 8th October, 1871 and continued burning until 10th October when it was put off. The fire caused destruction of property and loss of lives. When the last flames flickered out, the number of deaths were 300, over 200 acres of land was burnt and more than 100,000 people were homeless, the city's central business was in destroyed and thousands of buildings, trees and plants were entirely burnt out (Burgan 18). This paper examines this fire tragedy, the paper will specifically give an overview of the fire disaster, explain the possible cause of the fire, highlight the lessons learnt from this disaster and give recommendations.
Overview of the incident
On 8th October 1871, what started as a small fire turned to be a great fire rippling through Chicago city and destroyed nearly the whole city. The cause of the fire is not well known, but it is thought that the fire was caused by a cow kicking a lantern lamp in barn, which ignited the straw and later the barn (Burgan 18). The fire quickly spread through the city burning everything in its way rendering thousands of people homeless and without anything. The fire started on Sunday night and went on until Tuesday morning when heavy rains helped to stop it. After nearly 30 hours of burning, 300 hundred people died from the fire, and millions worth or property was destroyed.
How the incident occurred
On Sunday of 8th October at about 9.45 P.M. when most people were asleep, a fire alarm was heard from box 342 (Tyler 20). Two other alarms followed later, the last one summoning every available fire fighter engine in the city to the scene of the fire. Flames were seen coming from a small farm behind a house located near De Koven and Jefferson Streets (Tyler 20). The fire spread quickly o another building. People were not aware that the fire going to be the most destructive and the biggest fire tragedy in America history.