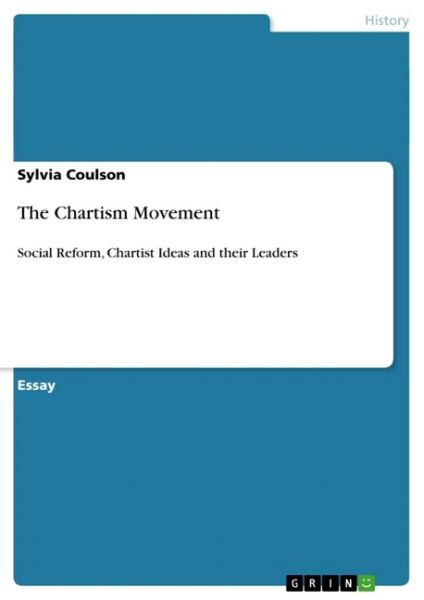 Essay from the year 2009 in the subject History Europe - Other Countries - Modern Times, Absolutism, Industrialization, grade: B, , course: Diploma, language: English, abstract: An evaluation regarding the aims and achievements of the Chartist movement as well as an exploration on the argument that Chartism was more than a "knife and fork rebellion".
The effectiveness of the leaders is analysed, with reference to tactics and "moral and physical force".

Chartism evolved from massive social and economic unrest in the 1830s amongst the working-class due to changes from the industrial revolution which created food shortages and unemployment. It was a politically orientated movement led on behalf of the working class, in support of poor housing and working conditions. Chartism was split into two different groups known as 'moral' and 'physical' force chartists. Fergus O'Connor led the physical force chartists whilst William Lovett led the moral force chartists. Both groups employed different means and tactics to try to get government to consent towards achieving the vote for the working-class by means of document known as a charter.