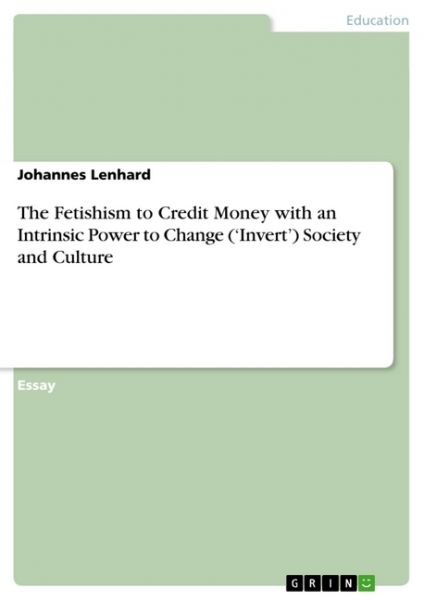 Essay from the year 2013 in the subject Pedagogy - Science, Theory, Anthropology, grade: 69, University of Cambridge, language: English, abstract: Modern money is not easily captured. Some accounts even claim that its defining feature is its quality as a universal leveller and yardstick (see Maurer, 2006:16). This quality, however, is exactly what we want to debate. Without being confined to a particular conceptualisation of 'modern money' as a means of payment, a store of value and a unit of account, I want to approach money as such in its various forms in traditional (nonmodern) contexts and our own 'credit-money'-bank form. The question is what effect a money has: does it flatten, commensurate and homogenise? Is it true that "when monetary exchange is anonymous and anonymizing, the social identities of transacting parties are irrelevant to the value of the objects mediated by money ... and so the things take on the powers of the fetish" (Maurer, 2006:23)? As the following discussion shows, you can indeed find examples for this flattening function of money. Not only does Marx explicitly focus on this negative, fetishised - i.e. concealed - quality of money as 'confuser', but Bohannan (1959) finds this effect of modern money on the Tiv economy in Nigeria. Kwon's (2007) analysis of Vietnamese ghost money generally agrees with Bohannan - but introduces a more balanced view on money's cultural meanings and potential problems of human agency and performativity as opposed to seeing it as an inherent quality. Simmel's other side of money's potential effect - increased freedom and a new form of relation - are brought into the debate with Cole's (2005) account of transactional sex in Madagascar partly building on Hutchinson's (1992) fieldwork among the Nuer. Money should not be seen through the eyes of Western folk tales (Maurer, 2006:19) but in its culturally specific context. Money is not one-sided but its effects depend on where it is used by whom in what kind of practice. Marx account is merely one part of this story - the one that now has become exactly that, a Western folk tale.