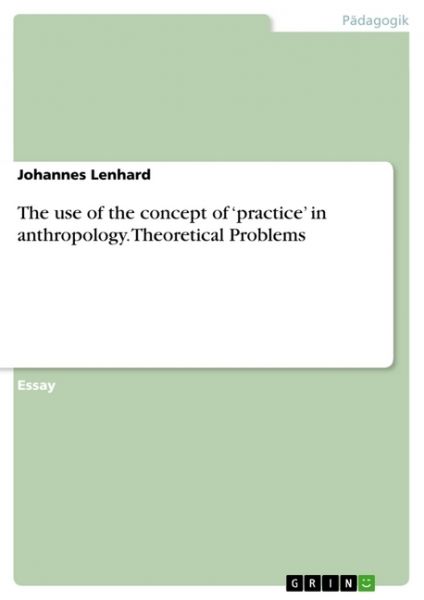 Essay aus dem Jahr 2013 im Fachbereich Pädagogik - Wissenschaft, Theorie, Anthropologie, Note: 2:1, University of Cambridge, Sprache: Deutsch, Abstract: Born out of critique on structuralism and its forbearers, practice theory arises in the late 1970s and early 1980s with Giddens in the UK, Bourdieu in France and Sahlins in the States. It most ardently argues for the relevance of intentional subjects in social and cultural process and similarly the impact of history or event upon the wider social structure (Ortner, 1984:137f). Focusing in the following on the work of Bourdieu (1977), Sahlins (1987, 1994, 2000) and later Ortner (1984, 1989, 2006a, 2006b), I argue that practice does mainly aim at solving one major theoretical problem: how do actors and structure interact in order to 'make' the world? How can (intentional) individuals be reconciled with the influence of an overarching system of presumptions? Or as Sahlins puts it (2000:295): "how shall we reconcile structure that are logical and durable with events that are emotional and ephemeral". The common ground most authors build shall also serve as a starting point for the more detailed account as expressed by Ortner (2006:2): practice theories "conceptualise the articulations between the practices of social actors on the ground and the big structures and systems that both constrain those practices and yet are ultimately susceptible to being transformed by them". In essence, practice theory proposes a dialectical relationship as the solution for the dilemma stated above. As part of this overall-endeavour, practice theory in its various forms has several sub-arguments that are concerned with the notions of structure and actor, the possibility of change as well as the importance of history respectively.