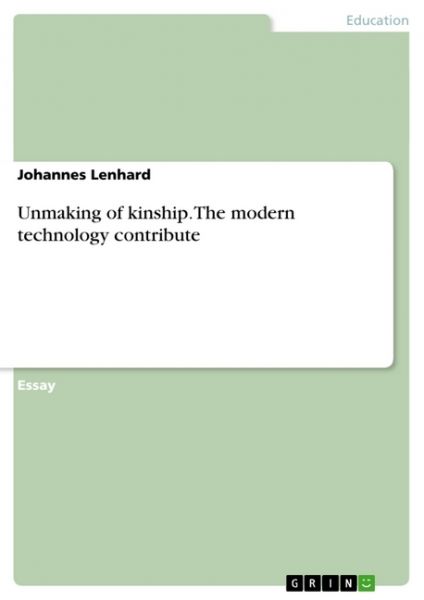 Essay from the year 2013 in the subject Pedagogy - Science, Theory, Anthropology, grade: 2:1, University of Cambridge, language: English, abstract: The two Boleyn girls struggled to keep up with King Henry VIII's demands in the fifteenth Century. Mary having been the King's mistress for assumingly two years, her sister Anne takes over to enchant the Henry and become Queen. Her fertility was, however, not exactly appropriate in the eyes of the King - no son was ever to be born from her womb. Henry had to find ways to get rid of her and her unbearable 'inability'. So at least runs the story that Justin Chadwick tells about the 'two Boleyn girls'. In their case, new reproductive technologies and genetic prediction would have 'made' kinship indeed. Would it only have been possible to help a little bit with the pregnancy, would it have been possible to predict (and change) the gender of the heir, the Boleyn family could have had a glorious future. NRTs had 'made kinship', had sustained it and potentially given Anne the chance to live on.

Strathern (2002:1) describes this synthesising character, the 'making of kinship' on the first page of 'Reproducing the Future'; she proposes a "contrast between traditional biology that could only get a handle on what life is through analysis - taking things apart to observe the composition of characteristics - and the possibilities afforded by computer simulation. Here one can synthesise various characteristics to observe the effect of combining them". Traditional biology as a discipline can only analyse, take apart, while new technologies help to synthesis and produce.