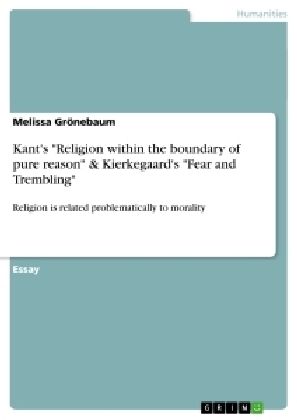 Essay from the year 2013 in the subject Philosophy - General Essays, Eras, grade: 1,7, National University of Ireland, Galway, language: English, abstract: "Religion is related problematically to morality" - a thesis which seems incredible at first view. How could the relation of morality and religion be problematic? Does the one not determine the other? Well, strictly speaking, already this question leads to the first possible point of discussion: for, which determines which? Does Religion lead to morality or does morality lead to religion? And does being religious not correlate with the meaning of to act in a good and moral way? To elaborate those questions and prove that and how religion and morality are related problematically, in this essay I will refer to Immanuel Kant and Søren Kierkegaard. Both are considered as being two religious men who start their thinking from the existing religious consciousness within the ethical and are therefore the rights philosophers to concentrate on while analysing the relationship of religion and morality.