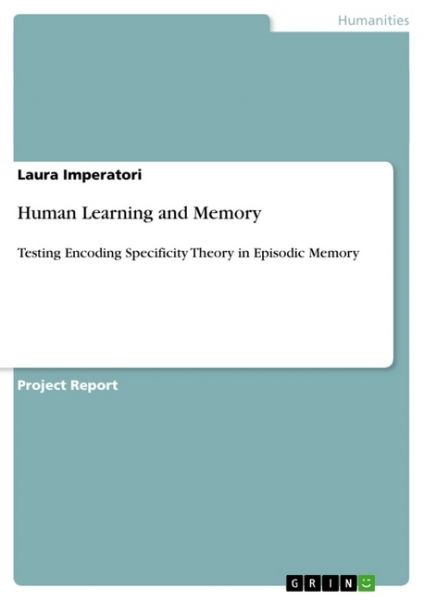 Project Report from the year 2012 in the subject Psychology - Learning Psychology, Intelligence Research, grade: A, University of Cambridge (Department of Experimental Psychology), course: Natural Sciences Tripos, language: English, abstract: The Generation-Recognition Theory and the Encoding Specificity Theory that both deliver a process description of human memory were both tested by the Cued Recall & Recognition test - a simplified form of experiments performed by Watkins and Tulving. The Cued Recall & Recognition test was performed on 42 subjects overall and the proportion of words that were recalled, but not recognised, was determined to be 0.27+/-0.19. Two different groups were allocated (unknown to the participants) on the basis of the stimulus sets used (stimulus set 1 or 2) to test the influence of the stimulus sets on obtaining the above results. We verified that our results were not likely to be due simply to the specific stimuli that were used but showing a more general effect given that we found t(40)_{0.05}=1.168 in a two tailed t-test, and, thus, retained H_{0}: ``There is no significant difference in the proportion of words recalled, but not recognised, between the two groups (due to the different stimulus sets used).'' The significant proportion of words being recalled but not recognised contradicts generation-recognition theory, but supports encoding specificity theory, which argues that retrieval is based on a congruence between how information was encoded (or studied) and how it is accessed at retrieval, hence memory is highly context-dependent and episodic in nature.