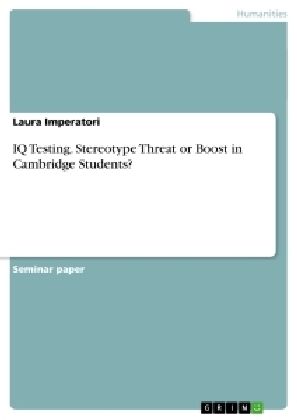 Seminar paper from the year 2014 in the subject Psychology - Learning Psychology, Intelligence Research, grade: A, University of Cambridge (Department of Psychology), course: Natural Sciences Tripos Part IB Experimental Psychology, language: English, abstract: Based on studies by Steele and Aronson that have revealed the phenomenon of stereotype threat in black students, we have tested whether Cambridge undergraduates might suffer from a similar stereotype threat of exceptional intelligence. In this paradigm they would feel the need to perform highly in all kinds of ability tests irrespective of their state anxiety, even if it is known that most people perform worse when experiencing greater anxiety due to a lack of focus. This possibility was investigated by dividing the students - unbeknownst to them - into two groups depending on which kinds of Raven's items - easy or very hard ones - they had to complete immediately prior to a speeded test (the Wechsler Digit Symbol) and a non-speeded test (vocabulary). The different speed conditions were used in order to estimate the effect of state anxiety, since various studies have shown that it might have a negative impact on speeded tests. This experiment has demonstrated that there is no statistically significant difference in the performance on the Wechsler Digit Symbol task as well as on the vocabulary test between the group that was administered the easy Raven's items and the one that was assigned the hard items.