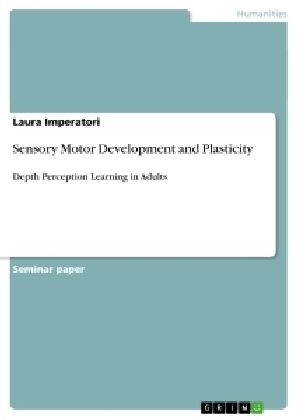 Seminar paper from the year 2014 in the subject Psychology - Developmental Psychology, grade: A, University of Cambridge (Department of Psychology), course: Part IB Experimental Psychology, language: English, abstract: Our aim was to confirm that vision in adults can be trained to associate certain retinal locations with specific depth arrangements of stimuli, such that presenting a depth-ambiguous stimulus at a certain retinal location would cause it to be perceived to have a specific depth arrangement. Even if Backus et al. have already demonstrated that "cue-recruitment" is still possible in human adults, i.e. that adults can still learn to associate any arbitrary stimulus feature with depth, we were not able to verify the hypothesis that our ability to perceive depth is not innate and - thus - purely a product of postnatal learning experience, whereby the capacity is still present in human adults. We verified that the 14 subjects could reliably report depth as a group, but they did not perceive, more than would be expected by chance, the same depth arrangement for an ambiguous stimulus at a particular location in the test block as they had for the unambiguous stimuli at that location in the training blocks. Hence, we rejected the first H_{0, training} hypothesis that there is no significant difference in the number of correct and incorrect answers during the training session, and furthermore, retained the second H_{0, test} hypothesis that there is no significant difference between the number of trials, in which a test block was perceived to be same or opposite to the previous training stimuli at the respective same location as in the training trials, since the paired t-test gave rise to t(13)_{0.05}=0.2 , which is well below the expected value for a one-tailed t-test of 1.7.