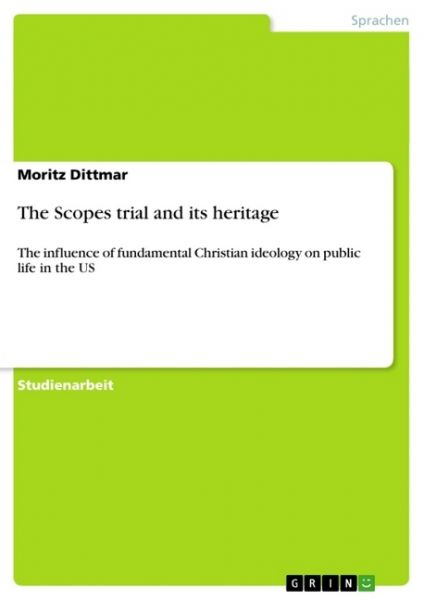 This pledge commonly marks the beginning of the school day of every American student.
The phrase "under god" shows the influence of the Christian church on public life in the United States. A religious pledge is imposed upon the American students by the state. This is the classical materialization of the conflicting priorities of state and church. The first time this conflict broke fresh ground in public however did not concern the pledge but rather the traditional clash of the theories of evolution and creationism. It was a conflict between those who endorse the creation myth, propped by the church and those who support the biological evolution supported by science and studies. This conflict reached the public life through the courtrooms of the famous Scopes Trial about 90 years ago. Although the Scopes trial took place in the 1920's the conflict has not lost any momentum and is as current as ever. Especially the two-party-system in the USA and the establishment of the tea party movement have contributed to the gaining gap between the conflicting perspectives, which has conceivably the potential to destroy the idea of the United States as a melting pot of all philosophies and religions.