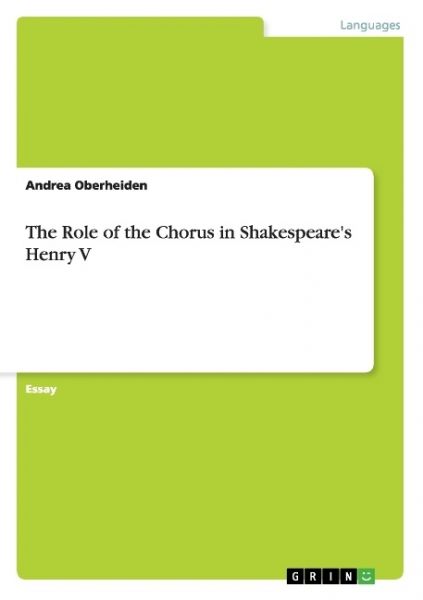 Essay from the year 2009 in the subject English - Literature, Works, grade: 1-, Harvard University (Department of English), course: Shakespeare and Modern Culture, language: English, abstract: At first view, the Chorus in Shakespeare's Henry V simply seems to serve two main practical purposes: to lead the audience through the play as regards content, and to form the audience's view on the character of King Henry V himself.
The Chorus with his announcements, explanations, apologies, and appeals to the audience, while itself not being part of the diegetic world, underscores the assumption that the Chorus, represented by one single character, functions as a presenter of the play in general and of each act in particular with the rather practical aim to lead the audience through several changes of time and scene: "Carry them [the kings] here and there, jumping o'er times" (1.29).
But understanding that as a reason or even as a justification for the existence of the Chorus in Henry V, the question has to be raised why a chorus, which is after all rarely used in Shakespeare's other plays, is used specifically in this play. There are numerous Shakespearean plays in which a unifying authority would have been highly useful because of a complex structure of the particular play in regard to time and setting such as in Macbeth, King Lear, or The Merchant of Venice, to mention just a few.