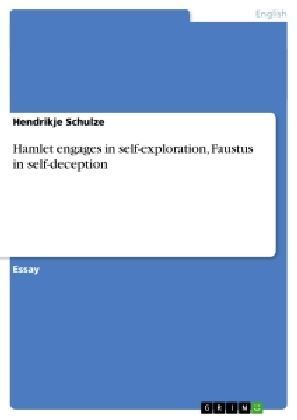 Essay from the year 2000 in the subject English Language and Literature Studies - Literature, grade: 1,3 (A), University of Sunderland (English Studies), 5 entries in the bibliography, language: English, abstract: In order to discuss this statement I would like to begin by having a brief look at
the age of Renaissance and pointing out some of its typical features. The Italian term
'Renaissance' refers to the rebirth of interest in the ideas of classical antiquity between
1450 and 1650 in Europe. The most important events during this time were the invention
of movable-block printing (1454), the discovery of the so called New World (1492), the
Reformation in Germany (1517) and England (1535) and finally the assertion of the
Copernican World System. These developments contributed to the revision of the old,
medieval picture of the world. They go together with a total social process embracing a
change in everyday life, every day ways of thinking, moral practices and ethical ideas.1
The concept of Renaissance is strongly connected with the idea of 'Renaissance
humanism'. Renaissance men put themselves more in the centre of their considerations
than men in medieval times. According to Agnes Heller one "might better speak of the
cult of the 'self-made' man"2, which means that destiny was no longer considered to be
God-given, but more and more became an issue of what oneself had made of it. [...]