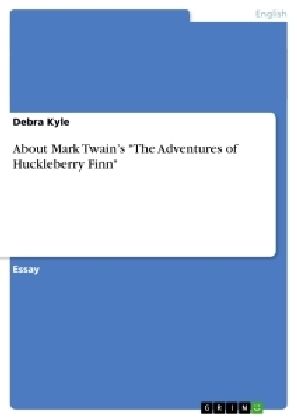 Essay from the year 2010 in the subject American Studies - Literature, grade: 1,3, Middlebury College (Bread Loaf School of English), course: Identities in 19th century American Literature, language: English, abstract: The Adventures of Huckleberry Finn is often referred to as a bildungsroman because
Huck, its hero, takes three major steps towards becoming a morally free man: to help Jim
escape, not to turn him in, and to go to hell to save Jim (Shockley 2). To a large extent,
Huck's growth is the result of spending time with Jim as he begins to view him as an equal
human being and thus treats him with respect. In a sense, Jim serves as a substitute for
Huck's father. Contrary to his natural father, Jim takes the role of the father that gives him
moral courage, and seeks to love and protect him.
Huck's character develops the more experience he gains which leads him to becoming
aware of society's falseness until he finally rebels against it by doing the right thing: freeing
Jim even though that means going to hell and eternal punishment. The quest for freedom
from social constraints is the propelling force that makes Huck flee the racist society in which
he is living. In the end, Huck is morally freed from Southern society's hypocrisy and injustice
by listening to his heart instead of his conscience. [...]