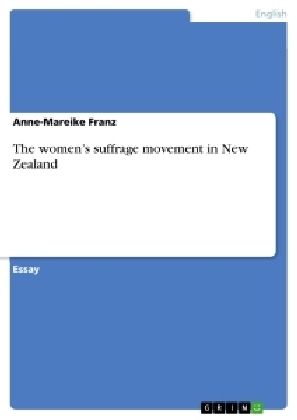 Essay from the year 2006 in the subject English Language and Literature Studies - Culture and Applied Geography, grade: 2,0, University of Trier, 5 entries in the bibliography, language: English, abstract: On 19 September 1893 New Zealand became the first state in the world, which granted women the vote . At this time Kate Sheppard, who was of great importance for the feminist movement, perceived the feelings of women in New Zealand as follows: "The General Elections have come and gone. For the first time the women of New Zealand have joined with men in choosing members of Parliament, and we have waited with bated breath for the deluge of calamities which it was prognosticated would follow the admission of women into the political arena." Although this step seemed to be revolutionary and sudden considering the restricted political rights of women in many other countries, the development of the women's suffrage movement in New Zealand was without violence and the outcome of a long historical process.