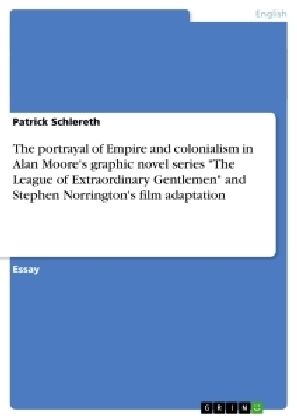 Essay from the year 2013 in the subject English Language and Literature Studies - Literature, grade: 1,0, University of Frankfurt (Main), language: English, abstract: Intertextuality always offers a thankful field for interpretation, and Alan Moore's graphic novel series "The League of Extraordinary Gentlemen" is a prime example of how to combine different literary characters and ideas in a vast fictional world. In the first volume of the series, which was published in 1999 and takes place in an alternate reality in 1898, five characters taken from Victorian Literature form a superhero team which is supposed to defend the British Empire. However, a closer look reveals that the graphic novel does not just represent a classic model of the superhero team narrative but also an ironic portrayal of the British Empire in terms of colonialism and the image of women in the Victorian era.
Moore's League obviously consists of the most famous characters from Victorian Literature. However, the reason Moore prefers these Victorian characters over others is not a question of popularity. It is rather that they mostly come from literary works that somehow explore the problems of colonialism, inner psychological conflicts or the role of women in Victorian England. In his graphic novel series, Moore does a great job combining all these issues to a fundamental criticism of the British Empire.
The following paragraphs mainly focus on the characters in the comic and their weaknesses through which the portrayal of the Empire is depicted. Eventually, the graphic novel is compared to its loose film adaptation "The League of Extraordinary Gentlemen" from 2003.