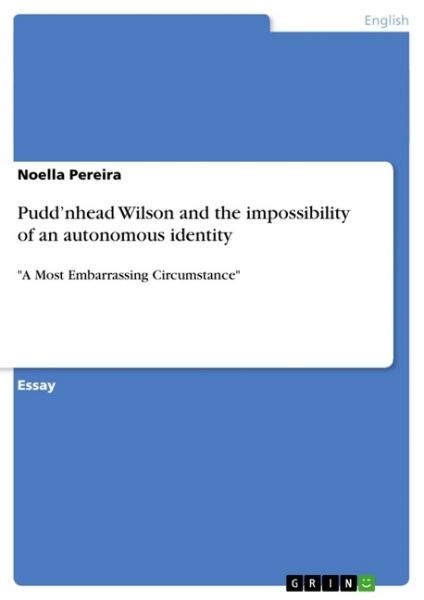 Essay from the year 2014 in the subject American Studies - Literature, grade: A, , course: M.A Hons. English Literature, language: English, abstract: Published in November 1894, when "the death rattle of reconstruction" echoed throughout America, Mark Twain
explores a land ravaged by racial turmoil in Pudd'nhead Wilson. The construction of race and the effect of the environment on the individual by swapping two nearly identical infants, one "white" and the other "black." Though slavery had been supposedly abolished for three decades, for blacks freedom was still far from a privilege. The greatest men in American history Walt Whitman, Abraham Lincoln and Martin Luther dreamed then same dream, the dream of a democratic nation.

American Political history tells us that from beneath the pains
of their heart at the loss of President Lincoln the black people had to deal with the murder of any hope they had left. For, it was immediately after the assassination of Lincoln that the rights of former slaves were restricted.

In the prevailing years, several laws to promote racial equality were passed, but the mindset of the white Americans never changed. While the nation's government attempted to give blacks a purely American identity, militant members of society sheltered the racial divide. Twain found himself, during the last decades of his life, in a perplexing time in
American history. His confusion is echoed in Pudd'nhead Wilson, as the author questions the logic of racial oppression and weaves a "virtuous mess" (Ross) of a tale. By exploring the lives of Tom Driscoll and Chambers, Twain examines the nature of racial identity. [...]