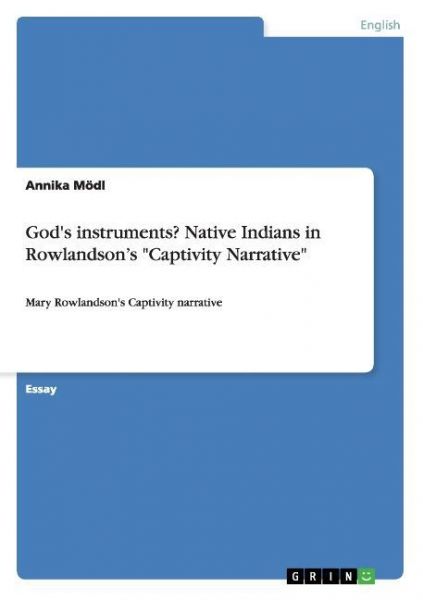 Essay from the year 2013 in the subject American Studies - Literature, grade: 1,0, Northern Arizona University (Literature studies), course: American Romanticism, language: English, abstract: When Mary Rowlandson is held captive by the Indians in the late 17th century, she has to deal with the situation in order to survive. But when we look at "A Narrative of the Captivity and Restoration of Mrs. Mary Rowlandson," it is important to understand the point of view of a Puritan woman. As such, Mary Rowlandson connects all events, good and bad ones, to God. For this reason, even the Indians' actions are initiated by Him. But why did Rowlandson decide to make them God s instrument in her story? Aren t the Native Americans supposed to be the wild, the savage, the opposite of the Puritans? Was it her strong beliefs, was it some sort of self-protection-mechanism, or was it her way to deal with a strange, foreign situation?