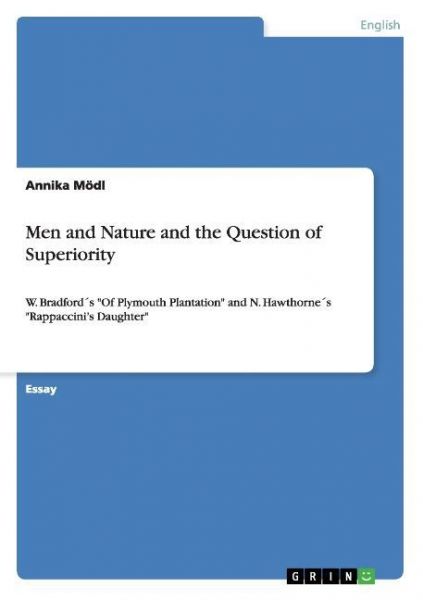 Essay from the year 2013 in the subject American Studies - Literature, grade: 1,0, Northern Arizona University (Literature Studies), course: American Romanticism, language: English, abstract: Those two texts were written more than 200 years apart from each other and at first sight they seem to deal with very different topics: the first settlement in America through the Puritans and the story of an Italian scientist and his momentous experiment. However, there is a motive that both texts share: nature. The relationship between man and nature differs in "Of Plymouth Plantation" and "Rappaccini's Daughter". Both texts are products of the literary periods they were written in: Bradford s narrative embodies the Puritan era, as he was one of the first Pilgrims who came to the new land. From a Puritan point of view, it was God who protected the English from this wilderness, or at least those who deserved it. Additionally, God is providing food and pleasant weather for his chosen people, to support them on their way to their new home. The text also shows that the Puritans are chosen by God to settle in their promised land, and therefore are allowed to use the nature however they want, or need to. Hawthorne, as an author of Dark Romanticism deals with imagery of nature too, but with a different purpose: The story of "Rappaccini s Daughter" shows, in a cruel way, what happens if people want to rule over nature and manipulate it with science. It is not only the beauty and spiritual meaning of nature that played a big role in Romanticism, but Hawthorne goes one step further to show the cruelty and power of nature. The story illustrates how scientific manipulation can turn nature, in this case the flowers, into something terrifying for both, nature itself and the people.