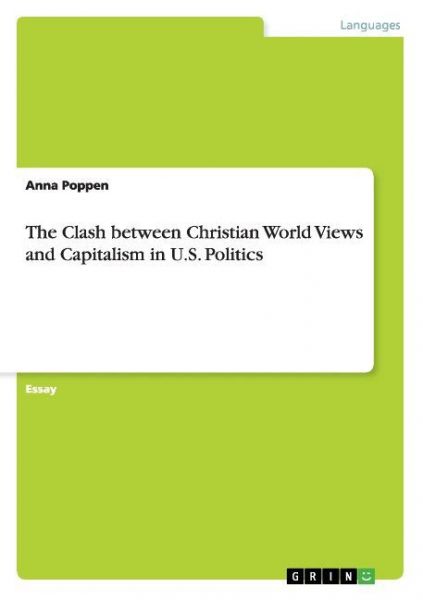 Essay from the year 2012 in the subject English - Applied Geography, grade: 1,0, Carl von Ossietzky University of Oldenburg, language: English, abstract: In recent years, especially after the start of the financial crisis, people all over the world have become more and more worried about the enormous influence of economic factors on their lives. On the level of politics, capitalistic interests seem to get out of control. In the ongoing presidential election campaign in the U.S., economic issues play a major role in the candidates' canvassing. At the same time, religious beliefs and conflicts seem to become more important in political debates. Political leaders use expressions of their faith to gain votes from certain sections of the population. A March 2012 study by the Pew Research Center found that in the U.S. "[a] plurality of the public (38%) says that there has been too much expression of religious faith and prayer from political leaders." In general, the influence of economic as well as religious issues seems to have gained influence, especially in U.S. politics. Thus, the question arises in how far politics, capitalism and religion are interrelated.
In his essay "The Market as God," Harvey Cox (1999) establishes a connection between these aspects by comparing capitalism to a religion. He argues that the principles of the free market are similar to certain religious concepts. Cox claims that the so called Market God has three typical divine attributes: omnipotence, omniscience, and omnipresence. Arlie Russell Hochschild takes up this idea and contends that there is a "sense of the sacred" (2003: 147) in what she calls the religion of capitalism (146). Both Cox (1999) and Hochschild (2003: 148) agree that capitalism functions as a rival religion against the traditional religions like Christianity and Judaism.
As mentioned above, in the course of the ongoing global financial crisis, it has become clear that politicians in nearly all governments are deeply involved in economic affairs and processes. The New York Times article "Protestors Against Wall Street" (2011) refers to the "elected officials' hunger for campaign cash from Wall Street." At the same time, a large number of U.S. politicians are outspoken and convinced Christians and even bring their religious points of view into political debates. If the so called Market God and Christianity are regarded as rival religions, this intermingling of economic and religious interests in politics seems highly illogical.