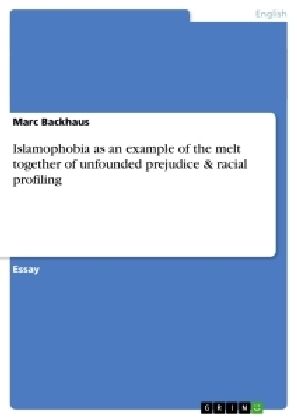 Essay from the year 2012 in the subject American Studies - Culture and Applied Geography, grade: n.v., Humboldt-University of Berlin (Institut für Anglistik & Amerikanistik), course: SE Writing the Term Paper, language: English, abstract: Pre-9/11 America was a country where "Islam was [...] well on its way to becoming accepted" (Fichtner 2011), where "2.5 million American Muslims were accepted without question as Americans" and "people could distinguish between Osama bin Laden and their family doctors". Yet after the attacks, "their world caved in around them". The country "which still absorbs a million immigrants every year" became "paranoid" and made them its "internal enemy". "[Unfounded] fear of and hostility towards Islam" (CAIR 2012) has lead to "discriminations [,] [...] exclusion [...] [and] stereotyping" of Muslims, "hate crimes" against them and "the presumption of guilt by association". A national poll by the Media and Society Research Group of Cornell's School of Industrial and Labor Relations shows that "44 percent of Americans [...] favor curtailing some liberties for Muslim Americans" (Friedlander Jr. 2004) because they believe "Islam is a religion of violence [...] [that] supports terrorism" (CAIR 2012) - despite in fact being "'[...] not very knowledgeable' or 'not at all knowledgeable' about Islam". Muslim Americans are arrested and questioned at US airports by virtue of "a face or a name" (MacFarquhar 2006) and placed on a "watch list" that is no longer able to "distinguish between a lurking terrorist and a harmless citizen with a Muslim name". Post-9/11 US Islamophobia therefore serves as an emphatic example of how unsubstantiated prejudice and racial profiling go hand in hand as the country becomes "locked into war mode" (Fichtner 2011).