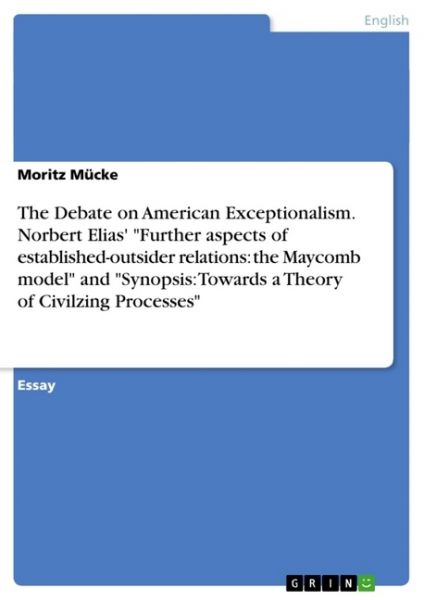 Essay from the year 2011 in the subject American Studies - Culture and Applied Geography, grade: 1,0, University of Frankfurt (Main) (Institut für England- und Amerikastudien), language: English, abstract: The insistence that the United States of America is an exceptional country is widespread, particularly and unsurprisingly in America. Given the country's economical and social history, the suggestion that the country is indeed fundamentally different from other nations can not be easily discredited. Many factors contribute to this idea and recent political developments, most notably the impressive comeback of the Republican Party in the 2010 elections, indicate that a majority of Americans disapprove of a political approach that would move the country toward a larger size of federal government, European-style socialism and an apologetic foreign policy.
The work of the late sociologist Norbert Elias is particularly relevant when American Exceptionalism is concerned. Elias examined the historical and social evolution of nations, a development which he called the Civilizing Process. He also focused on established-outsider relations and their underlying social dynamics and the friction that arises in communities with an established group and the outcast. In the case of the United States, one can easily detect patterns that bring to mind this part of Elias's work; the discrimination of ethnic or religious groups like native Americans, African-Americans and others ("No Irish need apply").
The aim of this paper is to evaluate Elias's theories in the context of American Exceptionalism. The question of whether the American Civilizing Process is in line with Elias's observations or constitutes a unique phenomenon within human history has to be addressed just as well as the depiction of established-outsider relations that he deals with in his essay on Harper Lee's novel "How to Kill a Mockingbird".