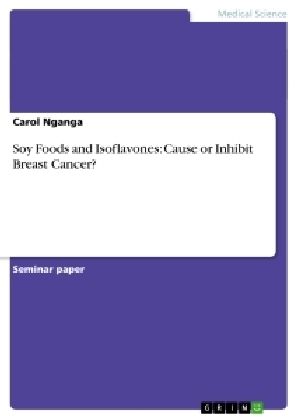 Seminar paper from the year 2011 in the subject Health Science, grade: B, The University of Liverpool, language: English, abstract: The impact of soy foods on potential breast cancer risk has been a topic of considerable investigation in the medical field. The primary importance of research on soy foods is derived from the fact that these foods are rich in isoflavones, which are supposedly associated with inhibition of breast cancer development (Messina & Wood, 2008, p.1). Isoflavones are mainly contained in soybeans. High soy food intake in Asian countries like Japan is said to have sparked research on the role of isoflavones on reduction of breast cancer in 1990s (Messina & Wu, 2009, p.1673). Some isoflavones such as genistein possess non-hormonal properties that are associated with breast cancer inhibition in women. Thus, it is highly prudent to say that there are several mechanisms by which soy may reduce the risk of breast cancer in women. However, recent epidemiological studies have provided evidence suggesting that isoflavones indeed promote breast cancer (Kang et al, 2010, p.1859). This is because isoflavones such as geinstein have been found to stimulate growth of breast cancer cells which are estrogen-sensitive in overectomized mice. Several in vitro studies have shown that isoflavones can both inhibit or enhance ability of drugs to fight breast cancer (Nagata, 2010, p.83). Thus, understanding of the effects of isoflavones on breast cancer is still vague. This paper explores whether consumption of soy foods and isoflavones cause or inhibit breast cancer in women. In section 1, definitions of Isoflavones, biological functions and endocrine therapies will be given. In section 2, supporting literature on the positive and negative effects of isoflavones will be discussed. In section 3, several studies will be used as examples to support the information provided in section 2.