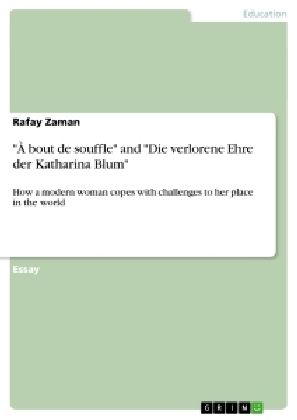 Essay from the year 2014 in the subject English - Discussion and Essays, grade: 75.00, University of Birmingham, language: English, abstract: One of the most common and familiar terms today that we have all heard of is that "It's a Man's World" and frankly speaking, in my opinion this is the truth. This I will discuss in details later on. However, the fact or so in my opinion; no matter how empowered women have gotten in regards to equal rights and women now being considered as able as men to do whatever kind of jobs, tasks and the under-taking on of responsibilities; the world as we know it shall always be a man's world as no matter how independent and empowered a woman may be, she will always have to cope with the challenges and obstacles that she faces, given the nature of a woman being one part and the practicalities being the other. I find this to be a rather interesting paradox if I may term it that way.

In the case of "Breathless" some of the key ideas of existentialism, for example stressing an individual's importance over society rules and the evident absurd confusion of life, lie at the core of the narrative. In my opinion the film shows how decisions that revolve around various aspects of life such as love, career and opportunity show our cowardliness, foreboding, betrayal and the thought of death on the prowl; on the difficulty of being who we pretend to be and even of knowing ourselves. In the void into which the youth of the times had fallen into, Godard could see only love to save them. This can be seen in the character Patricia who is a very independent woman yet she is scared of making decisions about her love life and her career. It is also very clear that despite her independence as a reporter and writer she is harassed by all the men she comes across in her life; the police, Michels' consistency to sleep with her and yet she struggles to decide whether or not he is the man who she wants to be with despite the fact that she knows the police is after him and he is a wanted felon for being involved in criminal activities, stealing cars and most importantly murdering a police officer. In fact at one point in the film she helps Michel steal a Cadillac to help him avert the detection of the police and also does not give away any information that might help the police catch him when she is questioned by the detective. Patricia is a very independent girl at the age of 20 and her exposure to the world due to her journalism really makes her a modern woman in terms of thought and knowledge. [...]