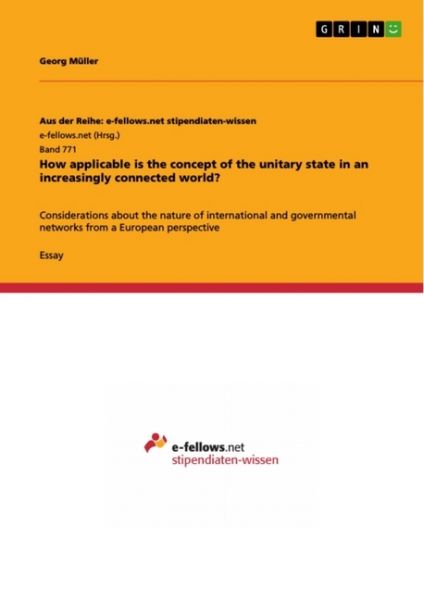 Essay from the year 2013 in the subject Politics - International Politics - Topic: Globalization, Political Economics, grade: 2,0, University of Richmond, language: English, abstract: Anne Marie Slaughter claims that the unitary state is a fiction and states are, in fact, disaggregating, whereby she means that domestic state and non-state actors are increasingly engaging in activities outside their own country and often in collaboration with foreign organizations and governments (Slaughter 2006, 12). This paper argues that the unitary state is indeed a concept that needs to be rethought, since it often fails to describe today's world order, especially within the EU. Firstly this paper will look at the role of the unitary state arguing for its continued relevance and at the same time making the case for a variety of networks within each state. Secondly this paper attempts to analyze the role of subnational actors within the EU and especially Germany, as a powerful counterargument to the unitary state. Furthermore a closer look shall be taken at the role of non-state actors; in particular MNCs. Fourthly this paper will show that international institutions, such as the EU, are not mere tools for peacekeeping but cooperations of countries for diverse and not necessarily selfish purposes. Finally this paper will conclude that the EU can serve as an example for the disaggregation of the unitary state and that more attention needs to be paid to the role of subnational actors.