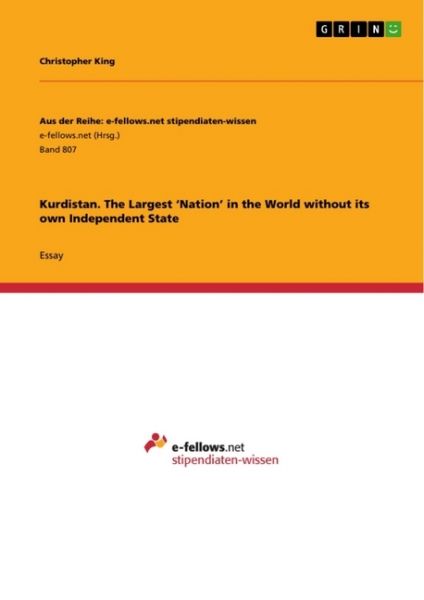 Essay from the year 2013 in the subject Politics - International Politics - Topic: Peace and Conflict Studies, Security, grade: 1,0, Indiana University (Department of International Studies), course: Nations, States and Boundaries, language: English, abstract: In a continually globalizing world, the question of identity becomes more and more prevalent among societies. What is identity? How do we define it? Across the world individuals are seeking to belong to something that can define them and give them something to set them apart from the other seven billion people in residency on the planet. However, also as these questions become increasingly important, conflicts can arise between different ethnic, cultural, or societal groups. Presently, one of the more notable examples of this is that of the Kurds and their continued struggle for a state of their own. The Kurds make up "the largest nation in the world without its own independent state" (Gunter 2004: 197). Spread across Iraq, Iran, Turkey, Syria, and even small parts of Armenia (cf. Yavuz 1998: 9), the Kurds are a scattered people across various state borders. With this in mind, can one speak legitimately of a Kurdish 'nation' and if so would creating an independent Kurdish state truly benefit the Kurdish people?