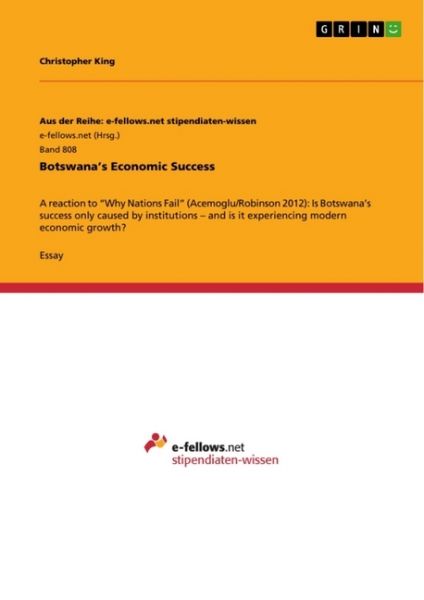 Essay from the year 2013 in the subject Politics - International Politics - Topic: Globalization, Political Economics, grade: 1,0, Indiana University (Department of Political Science), course: Politics of International Development, language: English, abstract: Botswana is a landlocked country in southern Africa with a population of about 2 million people. It used to be one of the poorest countries in Africa, but after it gained independence from the United Kingdom in 1966, it went on a transformation to a middle-income country with a per capita GDP of $16,800 in 2012 (cf. Central Intelligence Agency 2013). Today, Botswana is a multi-ethnic and multi-party representative democracy with "inclusive institutions" and the least corrupt country in Sub-Saharan Africa (cf. Transparency International 2012). It is ranked by Freedom House as "Free" and has a very high HIV rate of 24.8%.
Botswana has been framed as an exceptional economic success story in Africa and the following essay will explore whether institutions are the only cause of Botswana's economic success and if Botswana is experiencing modern economic growth.