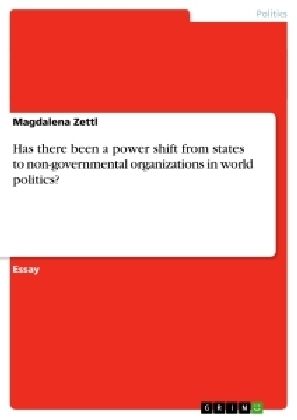 Essay from the year 2013 in the subject Politics - International Politics - Topic: International Organisations, grade: 1.8, , language: English, abstract: The essay analyzes if there has been a power shift from states to non-governmental organizations in world politics and critically analyzes the following two standpoints: some scholars (Lipschutz, 1992; Mathews, 1997; Keck & Sikkink, 1998; Rosenau, 2002) see the emergence of NGOs from a bottom-up perspective and argue that the decline in state power is a causal consequence of the increasing emergence of non-state actors in a zero-sum-relationship. Others (Reimann 2006, Sending & Neumann, 2006) view NGO growth as a top-down process and assert that states encourage NGO development and that non-state actors and nation-states merge into one network not sharing a limited amount of power but expanding on power.