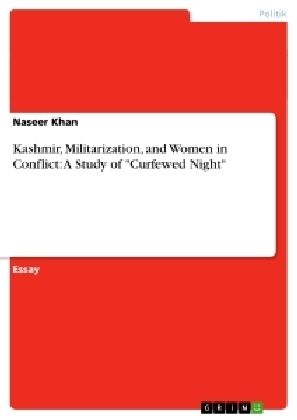 Essay aus dem Jahr 2011 im Fachbereich Politik - Sonstige Themen, , Sprache: Deutsch, Abstract: The region of Kashmir once known for its scenic beauty has been caught in a political
uncertainty from last two decades. The political strife has made direct and indirect impact on
the population living there. Kashmir once a pioneering place for all trades and prized
destination for tourists is now off colour due to chaos and confusion. The scene got changed
abruptly and it took a different shape which was beyond the imagination of the common folk:
the rustic 'ponnywalla', (horseman), the Kashmir ki kali, boatman, all disappeared from the
scene and were replaced by the torturing soldiers, crackdowns, frisking and militants... the
white land which turned red due to bloodshed (Naseer 127).
The uncertainty made traumatic impact on the families living there especially on those
who experienced dreadful events of chaos, conflict, killings, crackdown, beating, frisking, by
soldiers, gunfire's etc. Directly or indirectly all became vulnerable to the considerable
emotional anxiety and physical reactions: [...]