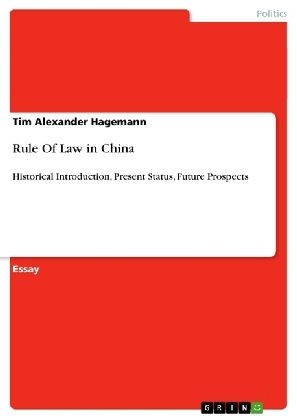 Essay from the year 2013 in the subject Politics - International Politics - Region: Far East, grade: 2,0, China University of Political Science and Law, course: Introduction to Chinese Law, language: English, abstract: The People's Republic of China in 2013: 1.3 Billion people on the verge of becoming part of the - expected - ruling nation of the 21st century. By smartly adapting western style economic policies to replace the hence centrally planned by a well functioning market economy, the former developing country has managed to rise in just 3 decades from the ashes of the political chaos of the cultural revolution to the olymp of the world's leading industrialized nations. Reaching an economic accural rate of annually over 8 Percent, it already managed to took over the place of Japan in terms of GDP and is now only second to the United States, while the gap between them continues to decrease every year.