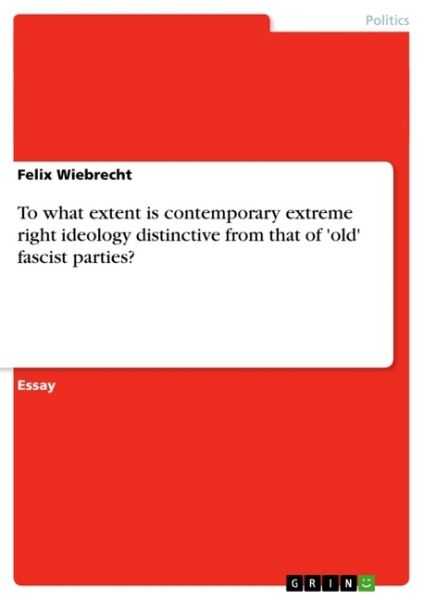 Essay from the year 2013 in the subject Politics - Political Theory and the History of Ideas Journal, grade: 16, University of Aberdeen, language: English, abstract: The ideology of today's parties on the extreme right of the political spectrum is often also
promulgated'neo-fascism' to exhibit an affiliation to the fascist parties of the inter-war period.
Whether this label is appropriate or fails to read the new extreme right's political agenda will
be examined by this paper. In order to do so, it will first clarify who we address when
speaking about the term 'fascism', then it will point out the defining characteristics of the
fascist ideology in order to compare it finally with the set of ideas of the new extreme right.
First of all one needs to illuminate the terms 'fascism' and the 'new extreme right'. The first
one always refers to Italian fascism under Benito Mussolini between 1922 to 1943 and,
although lightly different, the German nationalsocialist model, developed and carried out by
Adolf Hitler and th Nationalsocialist German Worker's Party. Moreover there were several
other fascist parties in Europe throughout the inter-war period, namely Heimwehr (also:
Austro Fascists) or the Union Movement in Britain, but many more as well, which however,
could never gain as much influence as the preceding examples. [...]