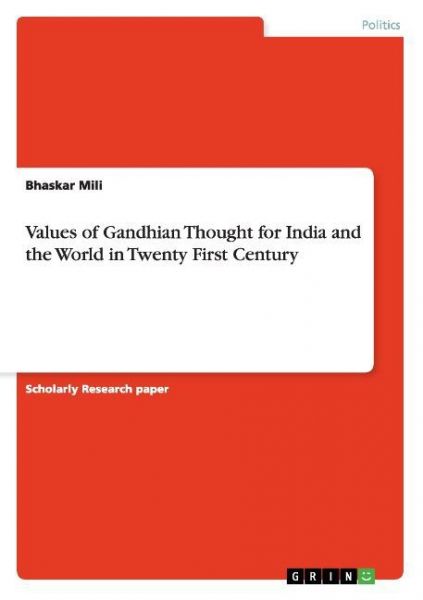 Research Paper (undergraduate) from the year 2013 in the subject Politics - International Politics - Region: Far East, grade: 9.2, , course: Modern Indian Political Thought, language: English, abstract: Gandhi's teachings have been contentious. They were contentious when Gandhi was alive and they continue to be contentious today, more than 60 years after his demise. There has always been a solid faction backing Gandhi's thoughts and ideas, while several others have derided them as backward, patriarchal, utopian, chief among them being the Ambedhkar school and feminists.
Gandhism was born at a time when there was a need for a philosophy to fight the yoke of imperialism in India and elsewhere. Thus, Gandhism, had an intention of providing an alternative to the reigning economic, political structure of British India. Imperialism had entrenched its grip over India, and by the time of Gandhi, different methods of dealing with British rule had come and gone, like Moderates and Extremists and even more radical methods, based on terrorism and violence. The inability of all these methods, made it mandatory for India to devise another method of facing the imperial challenge and Gandhism arose as the main alternative which a majority of Indians identified with, lending it credence and legitimacy.
The two running leitmotifs of Gandhism, found in almost all his doctrines and teachings, are that of non-violence and the urgency attached to the fact of separating Western/European civilization from Indian civilization. In trying to conceive whether Gandhi remains relevant in the contemporary world, it is important to take stock of changes in the world context which have occurred in the past 60 or so years since Gandhi's death.