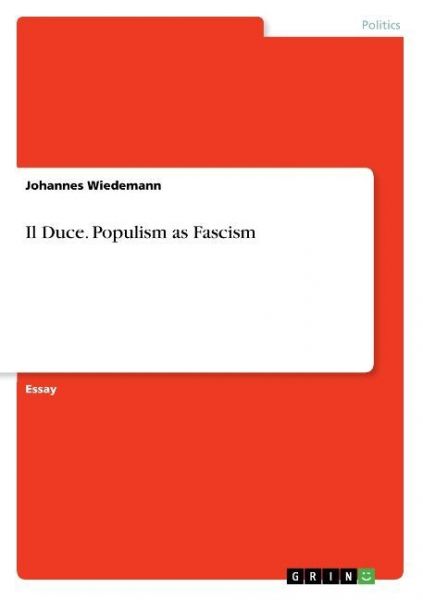 Essay from the year 2010 in the subject Politics - Political Systems - History, grade: 1,3, University of Flensburg (Internationales Institut für Management), course: "European Ideas - Populism", language: English, abstract: Among scholars of political science it is deemed not worth asking whether a political movement in democracy is populist or not, it is only a question to what extent. Consensus has been established also on populism being understood as a pseudo- and post-democratic pathology of politics in western democracies produced by the public perception that democratic ideals are corrupted. So it seems worth discussing what extent of populism in the democratic discourse is a danger to democracy itself. As Francisco Panizza declared: "Taken to the extreme populism descends into totalitarianism". What is an extreme of populism? And when does it start to be effective in the sense that it threatens a democratic system? The most prominent failure of democratic systems in modern history are the cases of the Weimar republic being taken over by the national socialists and the rise of fascism in the Italian republic after World War I, both examples of societies being in the transition phase from an authoritarian to a parliamentarian political system. For reasons of preserving clarity of argument, the latter example, Italian fascism and its leader, Benito Mussolini, shall serve as a reference point in order to point out what ideological ingredients and methods of communication of a totalitarian political movement are per definition "populist" and are able to gain popular support under specific political and historical conditions.