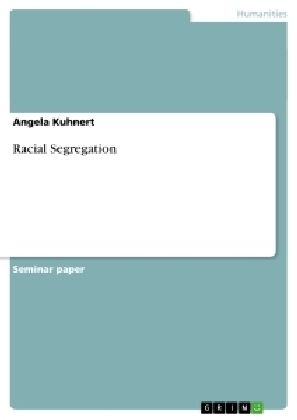 Seminar paper from the year 2011 in the subject Sociology - Social System, Social Structure, Class, Social Stratification, grade: 2,0, Corvinus University Budapest, language: English, abstract: Our today's idea of racism has its beginnings in the late 18th, early 19th century when the first researchers identified different races of humans and set the fundamental idea of the white superior race (Giddens 2009). Arthur de Gobineau was the first one to introduce three races which he called Caucausian (white), Negroid (black) and Mengoloid (yellow), however after World War II race-science was discredited (Giddens 2009). Until today there has been thinking towards racism based on genetic differences among many people and also researchers have not yet agreed on one viewpoint. A crucial point of racial segregation has been the skin colour, as examples show during Apartheid in South Africa or slavery in the USA; hair colour often does not matter at all or is only secondary (Giddens 2009). Due to the obvious differences in the skin colour ethnic or racial segregation is present in many places all over the world; the USA has white suburban regions around larger cities, Chinatowns, urban districts with mainly Latinos or African American population. This phenomenon creates inequality and concentrates the disadvantaged groups; therefore these areas often experience more violence and crime. This essay will demonstrate the origin and effects of racial segregation and will provide some brief ideas on how this issue can be improved.