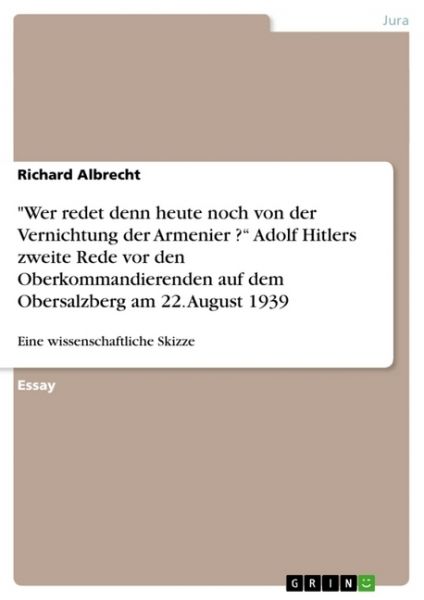 Essay aus dem Jahr 2007 im Fachbereich Jura - Europarecht, Völkerrecht, Internationales Privatrecht, , 0 Quellen im Literaturverzeichnis, Sprache: Deutsch, Abstract: In this short scholarly piece, the author, an experienced social scientist, gives a first insight into his research work on what Adolf Hitler really said to his Supreme Commanders on August 22nd, 1939, after Hitler decided to start the military aggression against Poland on 26th August, 1939, as written down in a
historical document the author, as the first scholar, had verified in the original German version. The central passage of Hitlers speech, as once published by antifascist emigré in Latin America, in 1944, is quoted in full length at the end of this smart essay. Having discussed three actual public statements on what Hitler is told to have said Richard Albrecht briefly discusses the importance of Reichskanzler Hitlers speech to the military leadership of Germany the author points out four both historical and actual questions, which are as relevant as until now not cleared up: (i) Why was the "US-exhibit 28"-document which US-newspaperman Louis
P. Lochner at first had published in 1942 was not correctly brought in a an original source and most relevant piece of evidence within the Nuremberg Trial, testifying the very plan of the military aggression against Poland ? Why did the military aggression on Poland
starting with an obvious provocation begun early on 1st September, and not, as regularly planned, on 26th August, 1939 ? Why was, for nearly forty years, an individual essay as published by a German historian 1968 on the subject which was not able documenting what Hitler really told his Supreme Commanders on 22nd August, 1939,
at Obersalzberg, in fact widely accepted within the scientific community of the historians, as the final scholarly say ? Why were most prominent German tenure-historians like Mommsen II jr. and Jäckel within the last forty years neither willing nor able to fulfil their ordinary duty in the sense and meaning of J.W. Goethe: Pflicht des Tages, and Max Weber: rein sachlich an des Tages Arbeit wirken - developing strategic hypothesis enabling to value historical texts, sources, and documents discussing problems like that one sketched in this paper in a as scientific as legitimate way as live-long/long-living German chairholderly mandarins in the field of contemporary history - but preferred to blame themselves (and also their entire profession) when for decades producing permanent rubbish talk on Hitler and the societal system in Germany 1933-45, when publicly performing one cloudy issue after another ?