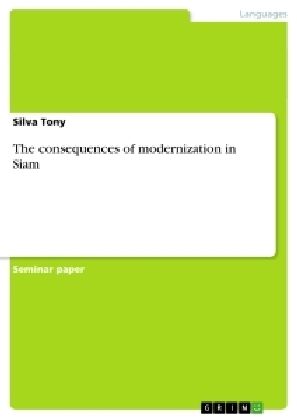 Seminar paper from the year 2013 in the subject South Asian Studies, South-Eastern Asian Studies, grade: A, The University of Chicago, language: English, abstract: The world is currently plagued with inequality and exploitation. Several movements have been established across the globe to preach peace, social justice and ecological sustainability. We often come across inspiring stories of individuals or groups utilizing their ingenuity in ensuring social justice and environmental protection. Sivaraksa in his book Conflict, Culture, Change: Engaged Buddhism in a Globalizing World notes that modernization is the root source of cultural erosion amongst the people of Siam. According to Sivaraksa, modernization has come with lack of respect for nature, social justice and equality (Sivaraksa 107).
Sivaraksa fends for the survival of his tradition - Buddhism. In essence, Sivaraksa is not entirely opposed to modernization; rather, he observes that the modernization process can also borrow from the sustainable traditional approaches. He is keen to select from and rebuild Buddhism in a quest for the traditional roots of his religion. Sivaraksa identifies the complex and ambiguous nature of modernity, and asserts the need to embrace the spirit of Buddhism in its traditional form (43).
Sivaraksa relates the modern history of Siam to that of Thai during the Western Imperialism. Even though King Mongkut employed several diplomatic efforts to defend Thai from foreign dominance, the Westren imperialists developed new reforms that saw a change in the culture, administrative structure, educational system and even the military structure. As a result of the elite's leadership, Siam grew so fast to become more like a Western center. During King Rama's reign, western culture dominated the lifestyles of the Siam people. As Sivaraksa notes, "life in the countryside was negatively impacted" (109)...