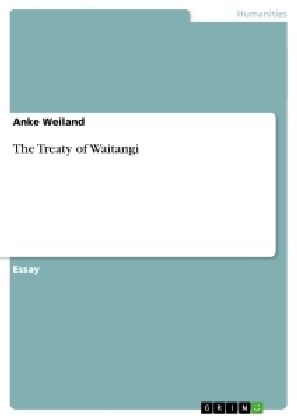 Essay from the year 2010 in the subject Cultural Studies - Miscellaneous, grade: n.a., Massey University, New Zealand, course: The Treaty of Waitangi, language: English, abstract: Maori wellbeing, including concerns such as education, health, reasonable incomes or appropriate participation in political discussions were important matters when the Treaty was drafted. Maori had been able to manage all those issues on their own and their methods were quite advanced. Having a look at the Maori fisheries for example, Cook claimed when he arrived in 1769 that 'he was highly impressed by the sophistication of Maori fishing compared to their own primitive gear' (Hersoug 2002). Besides that, also the social organisation of the business was well developed (Hersoug 2002). Things changed as soon as foreigners, namely the British arrived in New Zealand and 'discovered' this country. With this arrival, things in New Zealand became different. Due to the fact that there were no laws to which the british settlers felt bounded, they acted the way they wanted. Besides that, the French and the Americans started to peer at this land beeing lately added to the world map. At this time, the Crown felt constrained to take actively action on the situation. The document which turned out oas a result of this situation was the Treaty of Waitangi. Drawing observance to the Aborigine Act, the Treaty would recognize certain rights of the natives, including the issues mentioned at the very beginning. Besides that, the Treaty 'guaranteed full rights of ownership of their lands, forests, fisheries and other prized possessions' (Orange 2004) to Maori people. As the fisheries are a part of the guaranteed rights mentioned in the Treaty, they may be taken to examine the current impact of the Treaty in New Zealand society.