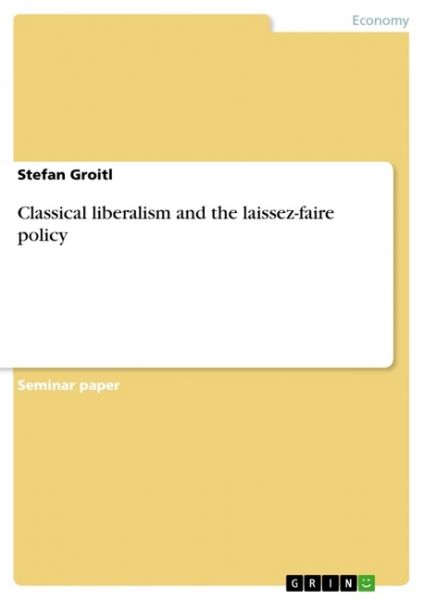 Seminar paper from the year 2011 in the subject Economics - Macro-economics, general, grade: 68%, University of Southampton, language: English, abstract: The political ideology of classical liberalism is a coherent vision how society should be organized. It became the dominant political philosophy in the middle of the nineteenth century (Hudelson, 1999, p.38). But it is important to distinguish between the different forms of liberalism. It has different meanings, depending on the century the expression was used. In the eighteenth and nineteenth century it can be labeled as 'classical liberalism' (Hill, 1964, p.394). In the twentieth century it can be denoted as 'welfare liberalism' (Hill 1964, p.394). The main difference between these two is the extent of governmental action (Hill, 1964, p.394). Core features of the classical liberalism are the liberty of individual citizens and the commitment to free markets and free trade, which are seen as the best way to organise economic life (Hudelson, 1999, p.37). Some important representatives of the classical school are Smith, McCulloch, Senior, Cairnes, Ricardo and Mill (Taylor, 1972, p. 27).