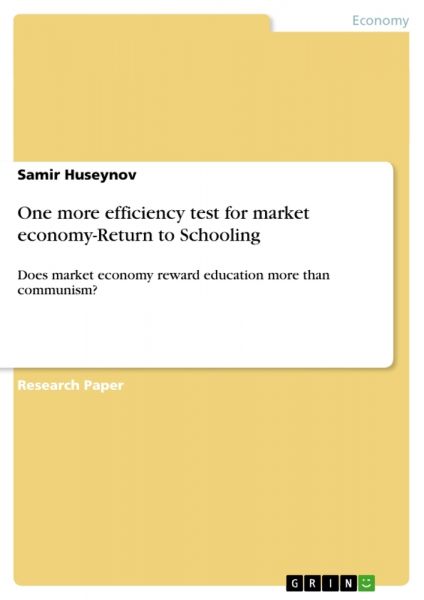 Research Paper (postgraduate) from the year 2009 in the subject Economics - Job market economics, grade: none, Central European University Budapest, language: English, abstract: This paper aims to analyze the change in return to schooling in Hungary, via comparing communism and market economy periods. As the philosophy of each system is very different, it causes differences in treatment of factors of production as well. While getting familiar with main literature of this topic, it turns out that there is not consensus about the main driving philosophy of communism in terms of organizing production.Beyond this, my paper can give some insights about efficiency of planned economy and market economy and can serve as a new milestone in long lasting debate between supporters of two systems. As you know, in last century, humanity experienced rivalry of market economy and communism. Superiority of each system wasclaimed by their proponents throughout sharp debates, which lasted approximately more than a century. After the collapse of SSSR and its communist block, post communist countries transformed their economic systems to market economy. In today's world there are still several countries with planned economy, like China with huge economic growth. So, the humanity still has alternative choice in terms of economic systems and "Which one is better? " is still open question, at least for modern communist economists after the experience of recent economic crises. So, I think my paper can be "fresh" voice in this debate as well.