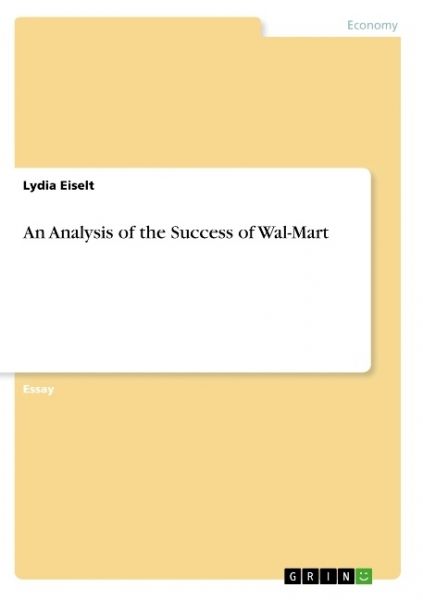 Essay from the year 2013 in the subject Business economics - Operations Research, grade: 73%, King`s College London, language: English, abstract: Wal-Mart has been extremely successful as a retailer and distributor; this can be seen when looking at its global sales. The determinants of this success are manifold and relate to its strategic decisions regarding the ways in which it competes. In analysing the company's strategies the effects that suppliers, competition and consumers have on it, and the effect that Wal-Mart has on them, need to be taken into consideration. The primary economic concepts that are used to explain Wal-Mart's growth and efficiency are economies of scale and scope, as well as factors related to entry and exit within the industry.

Basker (2007) argues that Wal-Mart's success can be considered from two different perspectives. Firstly, by increasing its size Wal-Mart has been able to take advantage of economies of scale and therefore reduce costs. Secondly, by having lower costs Wal-Mart has been able to grow and take advantage of economies of scale. These two arguments are linked and enforce each other, since growth and efficiency are both a cause and a consequence of economies of scale. One initial reason for Wal-Mart's lower cost is traced back to superior inventory and distribution technology that increase efficiency since the company's stores operate within the retail chain rather than being individual stores. It can be argued that the cost structure of Wal-Mart determines it size, because its costs are reduced through growth; it is advantageous for Wal-Mart to continue doing so on the chain as well as the store level.