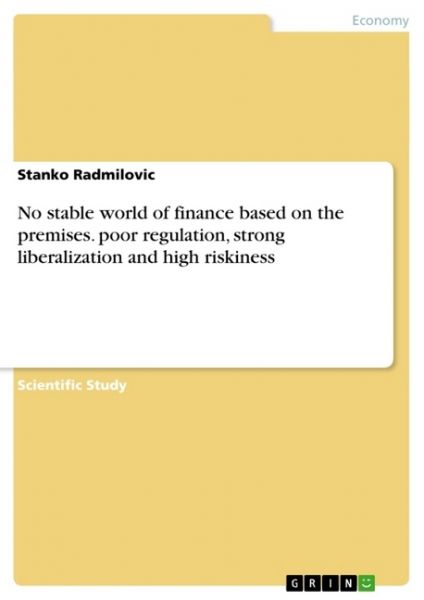 Scientific Study from the year 2012 in the subject Business economics - General, University of Novi Sad, course: Economics, language: English, abstract: Many will recall that we treat this current problem a lot earlier. Let's do it again, because topicality is not reduced.

It seems that it may be useful to emphasize to point out that the former Great Depression predominantly in the U.S. and today's global economic crisis has had a large and important common feature in the financial domain.

At least with the current global economic crisis is concerned, it seems that we come to the conclusion that it may be correct causality following formula: the role of the financial system in causing the crisis was important but not primary / fundamental. This also means that it is necessary but not sufficient to establish, a consistent set of financial systems - both national and global. It is necessary to remove the deeper generators disorders not only in financial but also in the real sector of the economy:

- As we know the Great Depression in the U.S. had a significant impact on the establishment of a repressive, hiperegulated Financial Sector (or as others prefer to tell the Government-led financial system);

- Performance of that repressive sector became an obstacle financial development,

- But when we take account other factors (computer and telecommunication technologies, financial innovation, the general surge of liberalization and the recent breakthroughs in financial theory) has inevitably been apperance a "financial revolution" in the second half of the seventies and eighties years of the last century;

- Financial revolution is, in fact, had two "arm scissors" jointly participated in the simultaneous realization of two-dimensional process of creative destruction:

(1) the destruction of the previous system of financial repression, and

Financial development/"Financial revolution", viewed as trade of too much libelarism - to much riskiness