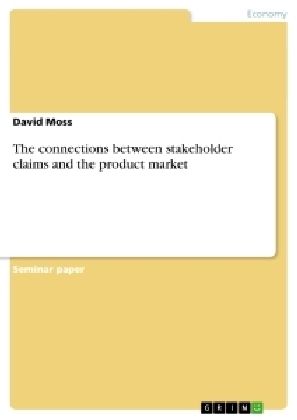 Seminar paper from the year 2011 in the subject Business economics - Investment and Finance, grade: B, King`s College London, language: English, abstract: Every business organization has its major stakeholders which include the owners or shareholders, the board of directors, the employees, the government, and this also goes as far as including the public. The regulations within the product market such as tariffs and payment of taxes have a stronger effect on the performance of a business. In the product market, there are many things that could take place. Checks and balances need to be practiced or applied by the regulatory authorities in order to avoid oppression and protect consumers from ill practices by the manufacturers and the suppliers (Freeman & Evan, 1990, pp.337-359). There is a direct connection between the stakeholders' claims and what goes on in the product market. This is because the actions taken by the stakeholders have a proportionate effect on the business practices in the product market by the concerned firm. Some of the actions could span from the type of product to be sold in the market to the prices charged for such a product. There are also other forms of authorities that have an interest in what a company does within a given product market. These could be in form of environmental bodies, food and drug regulation authorities, chambers of commerce, and the association of manufacturers, among other players who stipulate the policy an organization has to abide by.
This paper critically examines the connection that exists between the claims of stakeholders and the product market and will try to illustrate this by explicit examples.