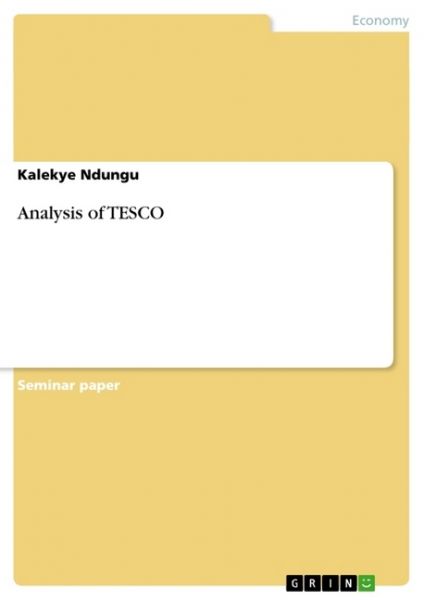 Seminar paper from the year 2011 in the subject Business economics - Investment and Finance, grade: A, University of Newcastle, language: English, abstract: Tesco is known as the one of the biggest supermarket chains in the U.K. The company is having the more than 2000 stores in the U.K alone and has about 2500 stores in the whole world. The company was founded by John Cohen in 1919 with the small market stall In London. Now, the company has added over 53000 employees across the world and catering to over tens of millions of customers in a single week. The company is having the operations in 12 countries across the world (Tesco).
Tesco is having the largest market share in comparison with all the other grocery retailers in the same country such as ASDA, Waitrose, Sainsbury's and Morrisons. The company is having the strong market share of 30.7% against ASDA 17.3%, Sainsbury's 15/9% and Morrisons 11.7%.
The business of the company is segmented into two parts one is supermarket retail sales stores and the other is Tesco bank. The major portion of the company's revenue is coming from retail stores spreading across the regions such as U.K, Asia and the Europe (Tesco 2013).