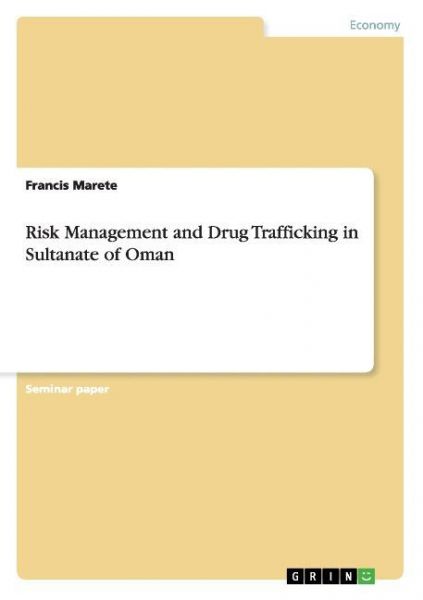 Seminar paper from the year 2013 in the subject Business economics - Economic Policy, grade: A, Stanford University, language: English, abstract: Sultanate of Oman is a country dedicated to drug trafficking control. In connection to this, the country believes that drug trafficking is an international challenge to all the societies all over the world. Therefore, it cannot be controlled in one country rather requires a collective effort nationally and internationally. Sultanate of Oman has, therefore, subscribed to the international, federal anti-drug initiative that has two major elements, including, reducing the demand for the drugs, and reducing the supply of the drugs (Craft & Howlett 2012).
The biggest challenge in trying to control drug trafficking in the whole world is rising demand that is being experienced and locating the main drug traffickers, who at times are linked top officials of the government, since decisions has to be made on the best approach to be used (Nooraie 2008). This makes it even harder for the government to accomplish the primary goal of reducing the supply of illicit drugs flowing into the country. In its effort to hold the customs of the people in the country and trying to adhere to the human rights, the government of the Sultanate of Oman is unable to completely eliminate drug trafficking in the country. According to Focardi & Jonas (2008), the supporting goal that will ensure that drug trafficking is minimal is to reduce the amount of all the illicit drugs cultivated, consumed and processed in the worldwide.