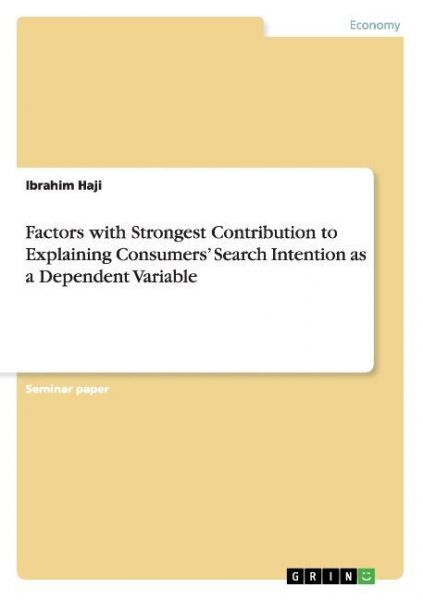 Seminar paper from the year 2013 in the subject Business economics - Marketing, Corporate Communication, CRM, Market Research, Social Media, grade: B, The University of Chicago, language: English, abstract: The findings of the study are well consistent with close-cut studies of other companies offering hospitality services online. According to Harcar and Yucelt (2012), perceived convenience ranked highest in explaining the consumers' search intention as a dependent variable and as if that is not enough, the same research findings did hold ground for another rather distanced online travel company as can be justified by the fact that perceived convenience by the consumer made the highest contribution in affecting consumers' search intention while their were searching for their services (Peng et al, 2013). These findings were again consistent with of another scholar who in his studies, discovered that perceived convenience had much contribution to make on the customers' search intention (Conyette, 2012).
On the other hand, the attitude of the consumer as far as his/her search intention is concerned also gave relatively considerable contribution. The findings of the study place the attitude of the consumer as the second strongest factor likely to affect the search intention of consumers and according to another research, the attitude of the consumer played a great role in affecting the consumer in his/her search intention as far as online travel is concerned (Khandelwal et al, 2012). It is explained that the consumer's attitude has a great effect on the consequential bearing of his search with regards to making reservations online of buying hospitality services online. This study finding is consistent with other studies and much more matches the expectations of stakeholders in this industry who without prior knowledge of customers' preferences and intentions, can not really compete in the industry (Park et al). Knowing the attitude of the consumer and understanding that this attitude would affect his/her search intentions is key to making any online travel business successes (Jha, 2014).
Intensive research placed subjective norm on the lower end of affecting consumers' search intention when compared with perceived convenience and consumers' attitude all through the study. [...]