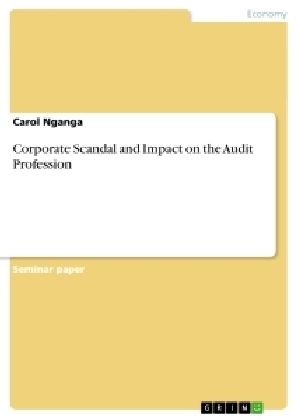 Seminar paper from the year 2012 in the subject Business economics - Economic Policy, grade: A, The University of Liverpool, language: English, abstract: The economic crisis in Europe and earlier credit crisis during 2008 have opened up the debate on the role of auditors and the corporate houses are carrying out their activities. The 2008 mortgage crisis resulted in many financial companies going bankrupt while some closing down permanently. The effect of crisis was felt world-over and one Indian company, Satyam Computers went bankrupt and this is a particular case where the role of auditors from PriceWaterCoopers House, India was questioned (The Indian Express, 2012). Larsson (2005) stated that major corporate frauds and scandals are regularly followed by the debate concerning the aim and scope of auditing. While there were such scandals earlier, this paper analyses one such corporate scandal and how it has affected and changed the profession of auditors in coming years.