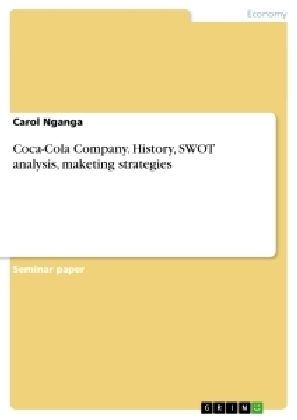 Seminar paper from the year 2012 in the subject Business economics - Economic and Social History, grade: B, The University of Liverpool, language: English, abstract: Coca-Cola Company has a long history dating back to 1886, when John Pemberton made Coca Cola syrup at his back yard and carried them to Jacob's pharmacy for sale. In the year 1887, the founder of the Coca-Cola, John Pemberton sold the enterprise to another chemist, Asa Chandelier. Asa Chandelier, through his efforts, turned the Coca-Cola Company in an international path through aggressive advertisements and marketing. At the time, the company manufactured only one brand: the Coca-Cola. However, over the years, it now manufactures about 400 brands in over 200 countries. During the early years of production, the company sold the beverages in glasses, from a fountain in the Jacobs pharmacy. However, in late 19th century, two lawyers obtained permission from Chandelier to sell the beverage in bottles. This was the beginning of the Coca-Cola bottled beverage, which is now carried anywhere all over the world.
Around this time, the company put up a competition for the design of the Coca-Cola bottle. An Indiana company won the tender to manufacture the Coca-Cola bottle. Their decision was convinced by the fact that the company manufactured a unique, decent looking bottle, which could be recognized in the dark. The shape is still retained by Coca-Cola Company to date. This step was geared towards isolating the Coca-Cola Company from other beverage companies because of its unique attributes. The bottle was to help the consumers identify the product.
The company changed hands again in 1919 when the company was sold to Ernest Woodruff for $25. Woodruff later entrusted the company to his son Robert Woodruff in 1923. Robert was a particularly smart man in business and he is entrusted with the honor of introducing the Coca-Cola to the world Olympic Games in 1928. He also pioneered the packaging of the Coca-Cola drink in six packs and other easy to carry packages. The company received worldwide publicity due to the Olympic Games, and it expanded distribution to many countries outside the US and made two distribution lines in the US. Another boost to the worldwide publicity of Coca-Cola was the fact that when the American government entered the World War II, Coca-Cola Company still under the leadership of Woodruff, offered it for sale at a lower rate to uniformed soldiers and the company bore the costs. [...]