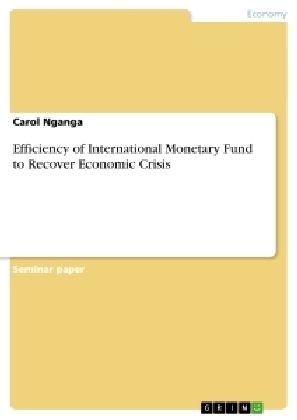 Seminar paper from the year 2012 in the subject Business economics - Economic Policy, grade: B, The University of Liverpool, language: English, abstract: Most of the economies in the world ended up in the bottom of a global recession that led to a massive business contraction. This led to a rise in unemployment and shrinking in government revenues. In recent statistics, large industrialized economies have begun to recover from the global recessions (Copelovitch, 2010.p.304). Many industrialized countries and emerging and developing nations have adopted economic stimulus schemes to rescue their economies from the economic scourge. Many countries have resulted to borrowing from the International Monetary Fund to add to their investments packages. This crisis exposed the fundamental weaknesses in the global markets demonstrating how current economies are greatly interdependent resulting to complex policy dilemmas (Khang, 2010). Countries have adopted a four phase plan that will enable them cope up with the crisis and are able to stabilize their economies. This include making interventions to restore confidence in their systems, putting measures to contain the aftermaths of the crisis, developing new policies in their financial systems that will reduce the risk and prevent future crisis. This has been implemented through international leaders converging to put policies, and give political backing in enforcing the proposed policies. The most important phase is the fourth phase that deals with political, social and security effects of the global financial crisis. This paper discusses the efficiency of the International Monetary Fund to recover economic crisis giving a comparison of Malaysia and Korea.
The IMF is an enormous IGO with over 185 countries that was established in 1944. In the emerging global economy system, the IMF plays an important role despite its policies which are westernized being questionable. This is as a result of offering to help non western nation states that do not subscribe to liberal economic policies (Yoon, 2005, p.182). IMF offers a three package which include financial assistance, structural reforms and macroeconomic policies for economic sustainability. There has been a controversy on whether the IMF is an independent global controller which was best displayed by countries such as Malaysia and Indonesia rejecting the offers during the Asian financial crisis (Copelovitch, 2010.p.304). The issue of whether the IMF is capable of creating a positive relationship among nations can be put under question but not the reality that the global economy needs a stronger financial IGO. [...]