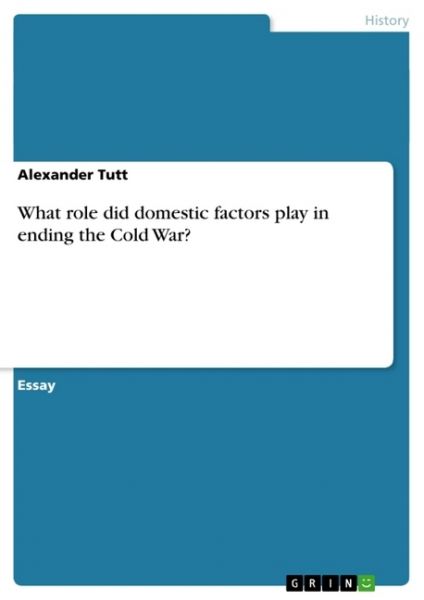 Essay from the year 2012 in the subject History Europe - Germany - Postwar Period, Cold War, grade: 1,3, , course: International Relations Theory, language: English, abstract: Scientific literature tries to give an answer to the question of the 'Cold War's End' in multiple ways. In order to relate eventual domestic factors with the peaceful ending of the East-West conflict, three questions have to be asked: What are the possible factors? Which states were involved? How can an impact of endogenous elements be validated? In order to identify eventual domestic factors, it seems expedient to have an initial look at the merit of two winners of the Nobel Prize for peace: Mikhail Gorbachev and Willy Brandt, founding fathers of glasnost and perestroika in the USSR and Ostpolitik in Western Germany, respectively. It is, however, kept in mind that the United States of America exerted indirect, as well as direct influence on domestic policy of both countries.
Given these preliminaries, the structure of this essay is fourfold. First of all, domestic factors are put into historical context considering social, political and economical factors both in Eastern and Western Germany and the Soviet Union. Afterwards, the historical facts are endowed with standpoints of several IR scholars, explaining theoretical issues and making predominant use of a social constructivist approach. Finally, a conclusion is drawn, summarizing and interpreting the results.