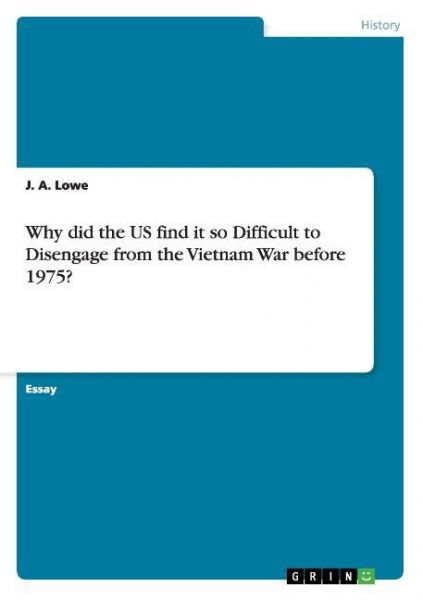 Essay from the year 2014 in the subject History - America, grade: 2.1, University of Central Lancashire, course: Modern World History, language: English, abstract: The United States committed officially 9 years of involvement to the Vietnam War. The United States signed the Paris Peace Accords on January 27th 1973 confirming that the United States would remove their troops from Vietnam and the war officially ended in 1975. The question as to whether the war could have ended sooner was raised by government officials during the involvement years, including Senator George McGovern who in a 1972 interview in The Free Lance-Star newspaper said that 'if Nixon can end the war by November he could have stopped it during his first few months in the White House'. The question has also been raised by historians including John Maberry who suggests that 'this war could have ended with the same result well before the 1973 cease-fire' and Van Nguyen Duong who argues that 'the war could not be ended sooner but was prolonged to the point it confused and demoralised the American people' . This essay will assess the reasons for America's long term involvement in the Vietnam War and the extent to which an earlier withdrawal was a possibility.